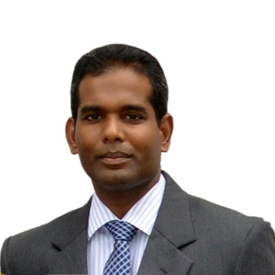 Professor Ajith Malalasekera graduated from the Colombo Medical faculty in 1996 with Upper Second class Honours and distinctions in physiology and biochemistry. He joined the Department of Anatomy in 1998 as a lecturer and completed his MS (surgery) in 2003. Embarking on further training in the field of urological surgery, he obtained his foreign training in Leicester General Hospital in the UK during 2004-2006. He completed the MRCS(Lond) and was board certified as a specialist in urological surgery in 2006. He was promoted to the position of senior lecturer in 2006. He is an examiner for post graduate examinations at the PGIM and the MRCS(Edin) examination. He is a Fellow of the College of Surgeons of Sri Lanka.

Prof. Malalasekera was the Head of the Depart of Anatomy during 2014-2017. He was also the Coordinator (administrative head) of the Allied Health Sciences Unit of the Faculty of Medicine, University of Colombo from 2007-2014. He has also held the positions of Chairperson of the Nephrourology module, and Senior treasurer of the Medical Faculty Buddhist Association. He is also a resource person for clinical teaching in urology / surgical anatomy for surgery professorial appointment students.

He was appointed as a Visiting Urological Surgeon, at the North Colombo Teaching Hospital, during 2008.

Prof. Malalasekera has published on basic sciences and clinical topics and is currently reading for his MPhil in bladder cancer genetics.