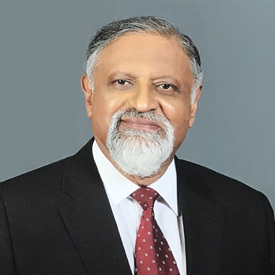 Professor Rohan W. Jayasekara is a former Dean and Senior Professor who held the Chair in Anatomy from 2000 to 2015. He was also the Founder Director of the Human Genetics Unit which he established in 1983 in the Faculty of Medicine University of Colombo. A pioneer in the field of Medical Genetics in Sri Lanka, he introduced and formally established the field of Human Genetics in Colombo. Prof. Jayasekara continues with his teaching career which he began in 1974 and presently in his 48th year as the Emeritus Professor of Anatomy.

He obtained his PhD in Cytogenetics from the University of Newcastle in the U.K. in 1980 while on a Commonwealth Research Scholarship. In 1989, he was awarded a Commonwealth Senior Medical Fellowship during which he acquired postdoctoral experience at Guys Hospital London, and at the New Addenbrookes Hospital Cambridge in the U.K.

Prof. Jayasekara has taught many generations of undergraduates and postgraduates in Medical Genetics. During his tenure, successful MSc and PhD programs were introduced which continue to date. He also introduced Medical Genetics to 4 Faculties of Medicine, 16 postgraduate courses at the Post Graduate Institute of Medicine [PGIM] and 3 Professional Colleges. He has been an examiner in Anatomy and Genetics for 10 specialties and has been a member of 10 Boards of study while being the Founder Chairman of the Board of Study in Sport & Exercise Medicine and of the Interim Board of Study in Clinical Genetics.

He was the recipient of numerous World Health Organization [WHO] Fellowships and Visiting Scientist Grants which gave him further research experience in Genetics at the National University of Singapore, Mahidol University in Bangkok, Prince of Wales Hospital in Sydney and at the University of Hong Kong. While on a Fellowship awarded by the Educational Commission for Foreign Medical Graduates [ECFMG] he continued his research at the Birth Defects Centre in Mobile, Alabama USA, where he held the post of Adjunct Professor for a period of one year.

He has published and presented 226 research articles and is the recipient of the President’s Award for Scientific Publications for six years and the National Research Council [NRC] Merit Award for Scientific Research for three years. In 2015 the year he retired, he led a research team that produced over 350 research articles that were published in International and National Journals and presented at International Conferences.

In March 2017 he was conferred the Sri Lankan Titular National Honour – Vidya Jyothi by His Excellency the President of Sri Lanka. This was awarded for his outstanding scientific and technological achievements. It is the highest National Honour for Science awarded for outstanding contributions to the development of the country through dedicated work in the chosen field. He has delivered 1 Oration, 48 invited lectures and made 16 keynote speeches as Chief Guest, at Professional Colleges and Educational Institutions.

In the field of Sports Administration and Education, Professor Jayasekara was a member of the National Sports Council in 2001 and was also a Founder Member and former President of the Sri Lanka Sports Medicine Association, which is affiliated to the International Federation of Sports Medicine [FIMS]. He was the team physician for the Sri Lanka Tennis Association including the Davis Cup teams from 1990 to 1999. During his tenure as founder Chairman of the Board of Study in Sports Medicine at the PGIM, the first Diploma for doctors in Sports Medicine was launched and preparations were made for a future MD programme in the field, which became a reality in 2020. He is currently a member of the Expert Medical Advisory Panel of the National Olympic Council of Sri Lanka.