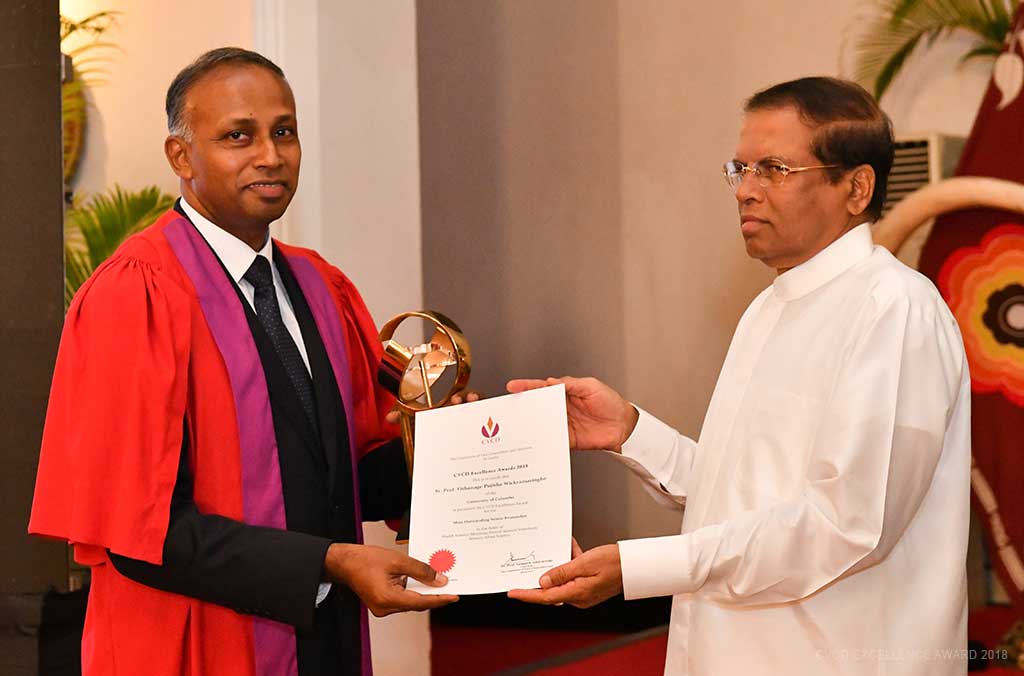 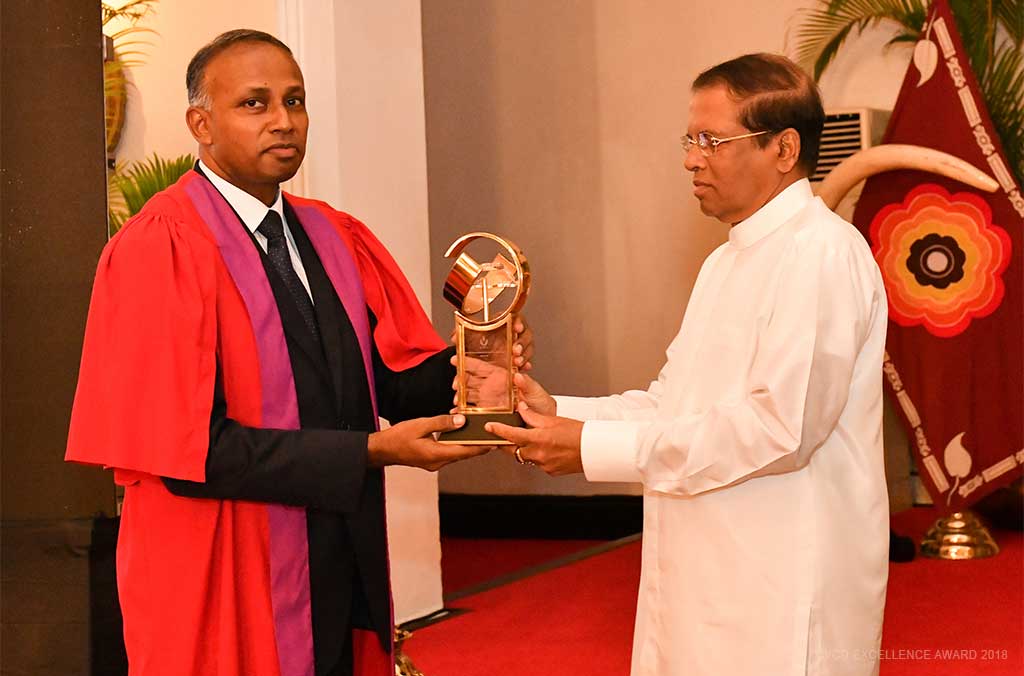 Professor V Pujitha Wickramasinghe – Department of Paediatrics, Faculty of Medicine was awarded the Committee of Vice Chancellors and Directors (CVCD) Research Excellence Award – 2018, for the Most Outstanding Senior Researcher in the field of Health Sciences including Medicine, Dental Science, Veterinary Science and other Allied Sciences. Professor V Pujitha Wickramasinghe is a University Academic, Researcher, Clinician and Expert Advisor to ministries of Health and Education of Government of Sri Lanka. He received his primary and secondary education from D.S. Senanayake Vidyalaya, Colombo. Prof Wickramasinghe graduated from the Faculty of Medicine, University of Colombo in 1996 with second class upper division honours at the final MBBS examination, obtaining distinctions in physiology and biochemistry. He completed his MD(Paediatrics) in 2002, and Board Certified as a Specialist in General Paediatrics by the Postgraduate Institute of Medicine, University of Colombo in 2004 and in 2010 obtained the PhD from University of Colombo. He received training in Clinical Nutrition at University of Queensland, Brisbane, Australia (2003/04) and Management of Post-Liver Transplant in Children from Ruinitidine, Bergamo, Italy (2010/11).

He joined the Department of Paediatrics, University of Colombo in 1998 as a lecturer, and promoted to Senior Lecturer in 2004. He was elevated to Professor by merit in Paediatrics in 2009 and promoted to Senior Professor in 2017. Prof Wickramasinghe has been an active member of numerous academic committees in the university and has held administrative posts such as Head of Audio Visual Unit (2007-2016) and Head of the Department of Paediatrics (2015-17). Professor Wickramasinghe has been consistently involved in teaching and assessment of undergraduates of all national universities and postgraduate trainees in Paediatrics, Chemical Pathology, Community Medicine, Human Nutrition and Clinical Nutrition of the Post Graduate Institute of Medicine, University of Colombo.

Prof. Wickramasinghe has over 68 publications in refereed national and international journals, 150 abstract presentations, 7 books and 22 book chapters covering childhood nutrition, growth and body composition. Extensively contributed to technical manuals of the Ministry of Health and Ministry of Education, Sri Lanka. Furthermore he has served in expert panels of technical groups of the World Health Organization and actively contributed in policy generation and development of technical manuals. Prof Wickramasinghe served as the Chairperson of the Editorial Board for development of Health and Physical Education School Text Books (2014-2018) for Grade 6 through 11(both Sinhala and English) and he is a Member of the Editorial Board of the Health Science text book for ‘Piriven’ education for Grade 3 through 5, of Ministry of Education. He is in several editorial boards of local and international journals. He has contributed extensively for capacity building of peers though delivering more than 90 CME lectures and also published extensively to the benefit of the public in both print and electronic media.

Professor Wickramasinghe has conducted many research including Clinical trials and is one of the principal investigators of the Dengue vaccine trial jointly conducted by Takeda Japan and Ministry of Health, Sri Lanka.  His research has contributed in highlighting issues such as childhood obesity, congenital heart disease, iron deficiency in infancy and contributed to change in policy and practice in the county. He has supervised post graduate research students in MD, MPhil and PhD, in addition to undergraduates. He is a recipient of research grants amounting to more than 80 million Sri Lankan rupees from local and international organizations including National Science Foundation, National Research Council, International Atomic Energy Agency. He has collaborations with local universities as well as University College London UK and Wollongong University, Australia.

He has received 21 awards for excellence in research including University of Colombo award for Excellence in Research-2006 and Presidential Awards for Research 2008, 2013 & 2014, and from local academic colleges in addition to numerous travel grants from local and international bodies. He has Delivered 7 National Orations awarded by academic colleges and universities. He has delivered the keynote address at the, National Nutrition Month -2017 and National Breast Feeding Week – 2018. Apart from the research activities, he has contributed his expertise to the World Health Organization HQ and SEARO, Ministry of Health and Nutrition, Ministry of Education, Post Graduate Institute of Medicine and National Medicines Regulatory Authority (NMRA).

Research interests are in the fields of childhood body composition, obesity and metabolic syndrome, maternal & child nutrition, effects of early nutrition on later diseases, prevention of Non Communicable Disease and Communicable diseases with special focus on Dengue infection. Considering his contribution to the field of health sciences, the presentation of the CVCD Excellence Award (Senior) in the field of Medicine is indeed a tribute to this eminent researcher.