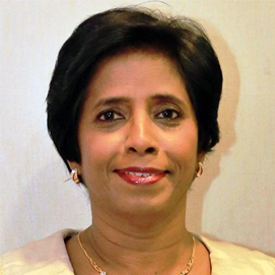 Department of Medical Microbiology and Immunology,

Professor Jenifer has trained and examined undergraduates for 38 years and postgraduates for 30 years and has served in numerous committees related to curriculum and examinations in the faculty. She was an active member in the re -orientation of medical curriculum that was launched in 1996. She has attended numerous staff development programs for self-development and later became a resource person for staff development programs.

Professor Jenifer has won NSF research awards and Presidential awards for more than 10 years and numerous awards for best oral and poster presentations in scientific sessions locally and overseas.

She has research interests including women’s health and career and medical education, and conducted research on improving educational achievement of students.

Professor Jenifer has contributed as a member of numerous consultative meetings in relation to infectious diseases, health, research, women’s health and education most of which were held as consultations leading to policy and/ or  action plan formulation.