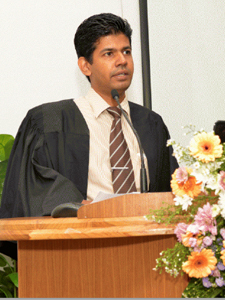 Priyanga Ranasinghe is a Professor in the Department of Pharmacology, Faculty of Medicine, University of Colombo. He graduated  in 2008 with second Class Honours and joined the Faculty of Medicine in 2012, after completion of his internship. He completed MD (Medicine) from the Postgraduate Institute of Medicine, University of Colombo in 2018. In addition to having a doctoral degree in the field of clinical medicine, he has also completed a doctoral degree in research (PhD) in 2018.

He has been involved in conducting research studies in several broad and vastly different areas of medicine, such as medical education, health literacy, health economics and ergonomics. The projects conducted by him includes clinical trials, pre-clinical trials, national wide surveys, national level audits, systematic reviews and meta-analysis, qualitative research projects and in-vitro studies, some of which are pioneer research projects in Sri Lanka. He has also been involved in several landmark national public health research projects, such as the Sri Lanka Diabetes and Cardiovasular Study (SLDCS). These studies were instrumental in establishing the national prevalence of diabetes, hypertension, and metabolic syndrome. Furthermore, the these studies, were able to establish the importance of  modifiable (e.g. physical activity) and non-modifiable (e.g. family history) risk factors in the aetio-pathogenesis of the non-communicable diseases in Sri Lanka. Furthermore, he was also a member of the research team which completed Sri Lanka’s first national level audit on hospital care of Acute Coronary Syndrome, which involved over 2,000 patients with ACS.

His primary research interests are to study the epidemiological aspects of obesity, diabetes and non-communicable diseases in Sri Lankans and conducting pharmacological and ethno-pharmacological interventional studies aimed at treatment and prevention. His PhD involved the development of Ceylon cinnamon as a novel therapeutic agent for diabetes mellitus.

He has more than 90 research publications in peer reviewed prestigious local and international journals, many of which are indexed in international databases such as the Science Citation Index (h-index 30, citation > 3,600). In addition, he has over 90 research communications presented at national and international conferences. According to the UGC research performance scheme, he is one of the youngest to reach the “Tier 4 star” (highest rank) in the Sri Lankan university system. In recognition of his outstanding achievements, he has received 20 awards. These include the Presidential Research Awards for Scientific Publications for2011, 2012, 2013, 2014 and 2015. Furthermore in 2014, he was the youngest recipients of the prestigious Committee of Vice Chancellors and Directors (CVCD) life-time Research Excellence Award for Most Outstanding Young Researcher in Health Sciences.

He was the founder student president of the Core Group for Disaster Management, at the University of Colombo. He was a Council Member of the Sri Lanka Medical Association in 2011 and 2015. He is currently the Assistant Secretary of the Sri Lanka Association of Clinical Pharmacology and Therapeutics and has been the Secretary of the Editorial Board, of the Sri Lanka Prescriber journal, which is the only national independent drugs and therapeutics bulletin in Sri Lanka. He has trained many junior researchers at undergraduate levels, including the supervision of community research projects of medical students for the past 4-5 years. In addition, he has been involved in providing research training for staff in the university system. Furthermore, he has been a member of the Ethics Review Committee, Faculty of Medicine, University of Colombo from 2014-2019.