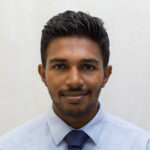 Mr. Surath Dissanayake entered the University of Colombo in 2012 as an undergraduate and continued his association with the University by joining the University as an academic after obtaining Second Class Honors (Upper Division) for his first degree.