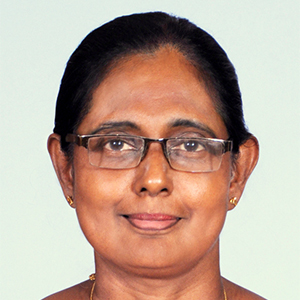 Dept. of Fundamentals of Nursing- Faculty of Nursing

Faculty of  Nursing, University of Colombo

Ms. W.A.Rupa Pathmini Menike received her primary education from Devi Balika Vidyalaya, Colombo & entered the School of Nursing Anuradhapura  in 1986 and completed her diploma in Nursing. Then She started her nursing carrier in National Hospital Sri Lanka in 1989. She  worked as a  nursing officer in medical, surgical ,orthopedic wards and also experienced as a theater nurse in Cardiac and orthopedic theaters.

She was selected as a Post Basic TutorTrainee in 1997 and completed the Diploma in Teaching and Supervision in 1999 .She was appointed as a Grade I nursing tutor and then promoted as a special Grade Nursing Tutor and she contributed her service in  School of Nursing Kurunagala  ,School of Nursing Kandana and National School of Nursing Sri Jayawardenepura. She was then appointed as the Principal of School of Nursing Mulleriyawa.  During her 32 years period of nursing profession  she was exposed to many foreign trainings and visits such as  counter- part training in nursing education in Japan for 3 months (2001),3 weeks training of nursing padagogy in Singapore(2016) and  3 weeks educational visit in South Korea.(2015)

Ms. W.A.Rupa Pathmini Menike is a registered midwife and she is a member of Sri Lanka Nurses Association and the Graduate Nurses foundation.She accomplished 32 years of service as a nursing officer, nursing tutor and a Principal of a nursing school, she joined to the Faculty of Nursing, University of Colombo in 2018 as Senior Lecturer (Gr II).