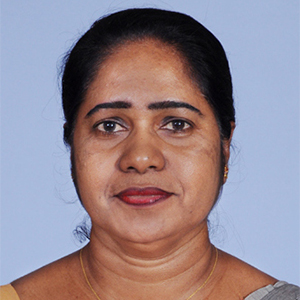 Dept. of Fundamentals of Nursing- Faculty of Nursing

Then entered School of Nursing Colombo in 1992. She successfully completed her Diploma in General Nursing and graduated in 1995.

After completing Diploma in General Nursing she worked as a registered nurse and this registration offered by the Sri Lanka Medical council (Reg. NO: 16103). She appointed as a nursing officer at mental hospital Mulleriyawa in 1996 and worked in several psychiatric wards for four years. She has enough experiences in handling patients with neuroses and psychoses. She has obtained many training programs both Nationally as well as internationally focused on the care of psychiatric patients. She obtained W.H.O. sponsored in-service program on management of psychiatric patient in 1997, Cognitive behavior therapy –  National council for mental health-‘SAHANAYA’- Borella in 1998, Certificate course in counselling- University Sri Jayawardenepura in 2003 and Diploma in psychiatric nursing-NIMHANS University in Bangalore India from 1998 to 1999.

Thereafter she transferred to National hospital Sri Lanka in 1999. She worked as a nursing officer in pediatric cardio-thoracic ward (Ward No: 1) from 1999 to 2000 and Medical Intensive Care Unit from 2000 to 2002. While working in these areas she has obtained many experiences regarding handling of pediatric clients with many cardiac problems and handling the patients with medical problems.

In 2002 she has selected from the competitive examination for training as a Nursing tutor (Grade 1 Nursing Officer -Education) at Post Basic College of Nursing, Ministry of Health. She has learnt various teaching methodologies used in teaching for nursing students. In 2003 she has successfully completed Diploma in Teaching and Supervision including Midwifery. And thereafter got the appointment to the National school of Nursing Sri Jayawardenepura as a Grade 1 Nursing Officer (Education). She assigned to teach various Nursing related subjects’ both  theory and practice for nursing students and the advanced training courses(Theater training course, pediatric training course, Midwifery training course) for nursing officers. In 2014, she promoted as a Special Grade Nursing Officer (Education) and worked until May 2018. During her carrier as a Nursing Officer (Education) she trained for various carrier development programs such as BSc Nursing degree ( Open University Sri Lanka), Msc Nursing ( INJE University , South Korea), Media program on nursing procedures,    Training of trainers on revised curriculum on toxicology for nursing students, Teaching and learning methods, WHO Essential newborn care, Language and presentation skills development, Tobacco cessation training for nursing tutors, Training of trainers on current management on post reproductive health for tutor nurses. And also she was a member of curriculum development committee for basic midwifery program, Ministry of Health.

She served in external lecturer of Nursing Unit of Aquinas college of higher studies and International Tertiary Education Center at Malambe, Sri Lanka.

She joined the academic staff of Faculty of Nursing, University of Colombo in 2018 as a Senior Lecturer Gr 11 attached to the department of Fundamentals of Nursing.