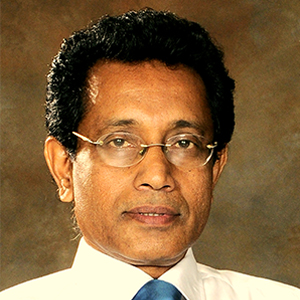 Dept. of Basic Science and Social Sciences for Nursing - Faculty of Nursing

Dr. G.A.S. Premakumara received his primary education from Royal College, Colombo & entered the University of Colombo in 1983. He pursued his BSc in Biological Science and graduated in 1987. He obtained his PhD in Natural Products Chemistry & Chemical Biology from University of Colombo in 1996 for his multidisciplinary research on Pharmacologically active marine natural products carried out at the Departments of Chemistry & Zoology of University of Colombo, WHO Centre for Chemical & Biological Sciences, University of Karachi and Department of Marine Biochemistry, University Pertanian, Malaysia. He received his Post-doctoral training in Nutrition Biochemistry & Health Food Biotechnology in Japan in 2001-2002 under STA Post-doctoral Fellowship & JSPS Invitation Fellowship. He has Charter in both Biology and Chemistry which he received in 2004 & 2012 respectively.

He served in the Temporary Academic & Research staff of Departments of Chemistry & Zoology of the University of Colombo from 1987 to 1992 & 1995-1997, Visiting Research Fellow to HEJ Research Institute of Chemistry, University of Karachi in 1993 and University Pertanian, Malaysia in 1994.

Dr.Premakumara holds/had held several key positions in National committees, Ministerial Committees, Governing Boards, Professional bodies & International committees, Faculty boards, University Examination panels as an examiner, Reviewing panels and contributed immensely to the academia and the R&D sector in the country. Further, he had been appointed by HE the President of Sri Lanka to National Research Council and to National committee on women. He is also an appointed member of the editorial board of the International Journal of Herbal Practice & Technology.

He has over 357 national and international research publications & scientific communications, 2 books, 5 book chapters and 2 commercialized patents. He has nearly 30 years of Academic & Research experience in the area of Bioactive Natural Products. Further, his research on health food properties of traditional rice has induced re-cultivation of traditional rice in the country.  Under his R&D projects, he has produced 9 MScs, 2 MPhils and 10 PhDs and 6 Ph.D. students are reading for their PhDs under his supervision.