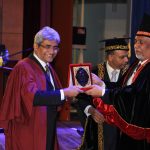 Senior Professor and Chair of Physics

He entered the University of Colombo in 1982 and graduated with a special degree in Physics, First Class Honours in 1985. He worked as an Assistant Lecturer at the Department of Physics until he received a scholarship to pursue his graduate studies at the University of Pittsburgh, USA in August 1987. He completed his M.Sc. in Physics in 1990 and Ph.D. in Relativistic Heavy Ion Physics in 1992.

He worked as a Postdoctoral Research Associate at the University of Pittsburgh from 1992-1995 and participated in collaborative heavy ion physics experiments such as E814 and E877 at the Brookhaven National Laboratory, U.S.A. In November 1995, he returned to Sri Lanka and joined the Department of Physics, University of Colombo as a Senior Lecturer. In 2003, he was awarded a Research Fellowship from ISP, Sweden and spent his sabbatical leave conducting lightning research at the Institute of High Voltage Research, Uppsala University, Sweden. He was promoted to the post of Professor in 2004, Senior Professor in 2012 and Chair Professor in 2015.

At present he holds the Chair of Physics at the University of Colombo. He is the Dean of the Faculty of Science. He served as the Head of the Department of Physics for five years, Director of Virtual Center University of Colombo for nearly three years, Director of Postgraduate Studies for six years and the Director of Undergraduate Studies for seven years. He contributed to the implementation of the credit based course system in the Faculty of Science. He also contributed towards introducing two new specialized degree programs in Physics, Engineering Physics and Computational Physics, and, the Masters degree program in Applied Electronics and an external degree program in Electronics and Automation Technologies.

His current research interests are on multidisciplinary areas with the focus in Computational and Instrumentation Physics. He has to his credit over 175 journal publications (with over 6000 citations), most of which are in indexed journals, and over 150 publications in local/international conferences and symposia through collaborative research work. For his research he was awarded an NSF commendation award twice (2004 and 2009), the Presidential Award for research publications on number of occasions, Senate award for research excellence and University of Colombo research award for Science. In 2016 he received the CVCD award for the most outstanding senior researcher in Physical Sciences and in 2021 he received GRC Lifetime award for research excellence. He has contributed to seven development publications of the World Bank. He is a life member of several professional societies in Sri Lanka including Institute of Physics Sri Lanka and Sri Lanka Association for the Advancement of Science. He is a member of CMS, a particle physics experiment conducted at CERN LHC.