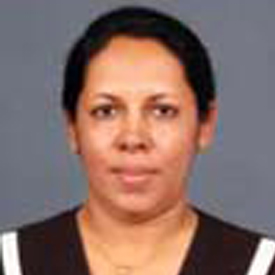 Professor Mangala Gunatilake is a Veterinarian, graduated from the Faculty of Veterinary Medicine & Animal Science, University of Peradeniya in 1991 with Second Class Honours and Distinctions in Microbiology, Parasitology and Public Health.

She joined the department of Physiology in 1993 and obtained her PhD from the University of Colombo in 2001.

Prof Gunatilake was awarded National Honours ‘Vidya Nidhi’ in 2019. She has received several National and international awards and scholarships in recognition of her achievements and contributions to science and technology. She has many publications to her credit in the form of conference papers, journal and newsletter articles, books and e-learning publications.