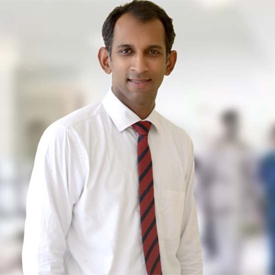 Department of Obstetrics and Gynaecology

Dr. Mohamed Rishard graduated from the Faculty of Medicine, University of Kelaniya in 2005 with a Second Class Upper Division at the final MBBS Exam with an island merit of 39 together with Distinctions in Psychiatry and Pharmacology. He commenced his service journey as a Medical Officer at the National Blood Bank, and was the Registrar at the Colombo North Teaching Hospital and the De Zoysa Maternity Hospital respectively from the years 2009 to 2012. In 2012, having completed his MD he was appointed as Senior Registrar at the Teaching Hospital, Kandy. During the tenure he had the privilege of being the acting Consultant Obstetrics and Gynecology. Having completed his postgraduate training in The United Kingdom as a Specialty Trainee in Obstetrics and Gynecology he is a member of the Royal College of Obstetricians and Gynecology. He has completed an Advanced Training Module in Medical Education (RCOG UK), an Advanced Training Module in Hysteroscopic Surgeries (RCOG UK), a Postgraduate Certificate Course in Medical Education (University of Dundee ), a Bachelor in Endoscopy and Diploma in Endoscopy. He works as a Consultant Obstetrician and Gynecologist since 2015.

He has been awarded the Shan S Ratnam – Young Gynaecologist Award in 2013 by the Asia Oceanica Federation of Obstetrics and Gynaecolgy (AOFOG). He is a proud Bronze medal recipient at the Geneva Inventions held in 2014 for the invention of Improved Condom Catheter used to treat the Atonic Postpartum Hemorrhage, He also received the Continuous Professional Development Award (CPD award) -awarded by the Sri Lanka college of Obstetricians and Gynecologists in the year 2013 for obtaining highest CPD points in the Academic year 2012. He was also awarded the Prof Arul Kumaran Young Gynaecologist Award by the SLCOG for the year 2019.

Dr. Rishard was a RCOG Certified medical educator for the postgraduate trainees in Obstetrics & Gynecological Clinical teaching and supervision to postgraduate trainees at Whittington Hospital, London and has contributed significantly to improve the quality of training programs (Medical Training Initiative, RCOG) during his stay in the United Kingdom.

A researcher, an innovator, a medical professional and a keen sportsman; Dr Mohamed Rishard is a renowned Consultant Obstetrician & Gynecologist attached to the De Zoysa Maternity Hospital for Women and also is a Senior Lecturer at the Faculty of Medicine, University of  Colombo.