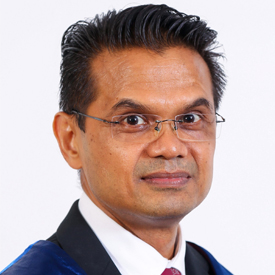 Thashi Chang is Professor in Neurology in the Department of Clinical Medicine of the University of Colombo and honorary consultant neurologist at the Professorial Unit in Medicine at the National Hospital of Sri Lanka.

He was educated at DS Senanayake Vidyalaya, Colombo. He represented the school Rugby teams of under 13, under 15 and captained the First Fifteen (under 19) Rugby team. He was the school Head Prefect from 1987 to 1988. He graduated from the Colombo Medical Faculty with first class honours and Distinctions in ten of the thirteen subjects. He was awarded 20 medals and awards including Gold medals in Medicine, Surgery, Paediatrics, Pharmacology, Parasitology, Physiology and Final MBBS. He was elected the ‘Student of the year’ of the University of Colombo and emerged first in the order of merit among all medical graduates in Sri Lanka in 1996. He represented both the Medical Faculty and University Rugby teams and was awarded University colours for Rugby.

He obtained his MD(Medicine) in 2002, MRCP(UK) in 2004 and MRCP(UK)(Neurology) in 2016. He was Board certified as a Specialist in Neurology in 2005. He was elected as a Fellow of the Ceylon College of Physicians and a Fellow of the Royal College of Physicians of London in 2013. He was awarded the Commonwealth Scholarship in 2003 to read for the degree of Doctor of Philosophy in Clinical Neurology at the University of Oxford in the United Kingdom which he completed in 2007. During this time, he also trained in Clinical Neurology at the Radcliffe Infirmary and the John Radcliffe Hospitals NHS Trust in Oxford. He served as the Clinical Lecturer in Neurology in the University of Oxford for a brief period and has been an Academic Visitor of the University of Oxford.

He has served as the Secretary of the Specialty Board in Neurology and the Board of study in Sports Medicine of the Postgraduate Institute of Medicine coordinating the development of curricula and prospectuses in postgraduate training in Neurology, Neurophysiology and Medical rehabilitation.